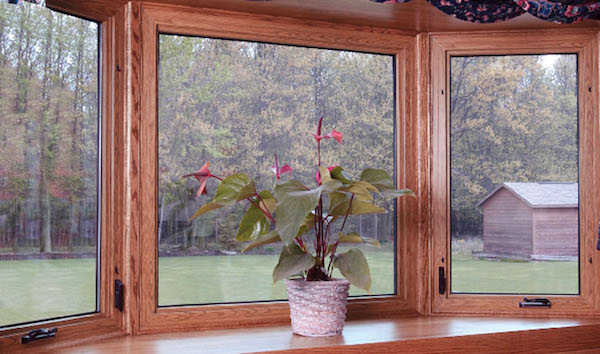 Apron: The decorative molding below the windowsill.

Awning window: A window with hinges on top that can be propped open like an awning.

Balance spring: A counterbalance for a sliding sash, usually used with a double-hung window to hold a sash open at any position.

Bay window: A projecting structure that come out of a house. It has at least three sides, each with a window, and its walls extends to the ground.

Bow window: Similar to a Bay Window but with a curved wall, rather than straight walls, projecting from the house. There are usually five windows to a unit.

Box head window: A window that allows the sash to slide vertically into the wall.

Cameo window: An oval or round fixed window.

Cames: The grooved lead strips that hold together panes in stained glass or lattice windows.

Cap: A horizontal cornice or molding that covers the top of a lintel.

Casement window: A window with hinges on the side. It opens either in or out, often operated by a crank.

Casing: The trim or molding around a window on both the inside and out to cover where the window meets the wall.

Chicago window: A large, fixed, rectangular window surrounded by two narrow but equally tall functioning windows. A Chicago window can be part of a projecting bay or flush with the wall.

Clerestory: A window, or set of windows, in the upper part of a high ceiling. This term is also used for windows in a church’s gable or nave.

Coupled window: Two windows with a mullion between.

Dormer window: A window that rises vertically from a sloping roof.

Double-hung window: A window with two over-and-under sashes that slide up and down.

Double-glazing: Two panes with air between for insulation. This can also refer to a regular pane with the storm pane behind it or multiple panes in a single sash. There is also triple-glazing and beyond.

Double-paned window: Similar to double-glazing, but with the two pieces of glass inside a single sash.

Drip cap: The piece that runs on top of a window to keep water from getting in.

Find Pros
Eyebrow window: A bottom-hinged, semi-circular window that rises vertically from a sloping roof like a dormer.

Fanlight: A semi-circular window above a door or window with metal bars spreading from the center like a fan.

Folding casement: A casement window that folds together to fit into a smaller space.

Frame: The structural system that holds the window to the wall. These are most often made from aluminum, wood, vinyl, composite, or fiberglass.

French windows: Also called French doors, this is when there are two door-sized casement windows that swing open from the center. They usually act as doors.

Glazing: One or several pieces of glass placed in a window sash. Also see glazing types.

Glazing channels: The grooves cut into a sash to hold the glass.

Glazing types: Refers to the treatment and layering of the glass: low e-coating, tint, and gas fill as well as double-glazing, triple-glazing, etc.

Guillotine window: An older version of the double sash window where only the bottom part moves. Wooden pegs are used to hold the window in different positions rather than counterweights.

Head casing: The top of the window frame.

Header: The support beam above a window that displaces the roof’s weight to the wall on either side of the window.

Head flashing: The flashing installed in the wall above a window.

Hopper light: A window where the sash opens in or out from the top, with hinges at the bottom.

Insulating glass: A multiple-glazed window with a hermetically sealed space between the pieces of glass. See gas fill for further insulation options between glazings.

Jamb: The molding around a window frame. The “side jamb” is vertical while the “head jamb” is horizontal.

Jamb depth: The width of a window frame when measuring from the inside to the outside.

Lancet window: Similar to a Gothic-head window but more often characterized as having diamond-shaped panes.

Lattice: An opening (window, wall, fence or door) filled with strips of metal or wood overlapped in a crisscrossed pattern.

Lintel: A horizontal beam or stone that runs between the uprights of a door or window.

Lite: A pane of glass within a window. Often used when talking about how many panes there are in a window (i.e. a 12-lite colonial window.)

Louvered window: A window with several glass, metal or wooden slats that open together like shutters, usually by pulling a lever or crank to adjust the angle. Also called a jalousie.

Low-emittance (Low-E) coating: A type of spectrally selective glazing where microscopic metal or metallic oxide is layered onto a piece of glass to suppress thermal radiation and radiant heat transfer. They are produced at various rates to allow for different levels of solar gain.

Mold stone: A window jamb made from stone.

Mullion: The vertical strip of wood that separates side-by-side windows.

NFRC rating: The National Fenestration Rating Council rates the energy performance of a window (i.e. the amount of radiant heat allowed in.)

Operable transom: A transom that can be opened for ventilation.

Oriel window: Similar to a bay window, it projects out from the wall, but does not extend to the ground. Instead the bottom curves back into the wall.

Palladian windows: A set of three windows where the center window is tall and arched and the two on the outside are rectangular, and match each other in design. This window set is usually used for high ceiling staircases and atriums.

Pane: A framed panel of glass or other transparent material. Single pane refers to one piece of glass in that frame, double pane, or double-glazed, refers to two pieces of glass layered on top of each other.

Parting strip: The thin strip of wood that separates sashes in a window. Also called a parting bead or parting stop.

Pivot window: A window that opens by pivot points between the sash and frame (opening horizontally, typically.) Provides for easier cleaning and maximum ventilation.

Queen Anne window: A window made up of multiple-sized windowpanes. Usually this configuration is on the upper sash, while the lower sash tends to be one piece of glass.

Sash: The parts of a window that holds the glass (the “doors” of a window.)

Sash and frame: The whole window system: the sashes and the structural frame holding a window into the wall.

Side light: A strip of vertical glass running alongside a door.

Sill: The horizontal piece at the bottom of a window frame.

Single-hung window: A window with two sashes where the top sash is stationary.

Slider window: Side by side sashes that slide horizontally.

Solar heat gain coefficient: The fraction of radiation coming through the window compared to the amount hitting the outside of the window. Common in the performance rating of manufacturers. (Similar to the shading coefficient.)

Solid frame: A window frame cut from a single piece of wood.

Spectrally selective glazing: Glass designed to control solar heat while allowing a higher level of visible light. The most popular form of this is low-emittance glazing.

Splayed window: A window set at an angle to the wall.

Stacked windows: A combination of several types of opening styles in the same unit.

Tempered glass: Heat-treated safety glass that shatters into pebbles rather than shards.

Thermal replacement windows: These are double-paned or triple-paned windows built to improve thermal performance. This is achieved through the combined use of gas fill and low-emittance coating.

Tinted glazing: An inexpensive glass treatment used to reduce solar gain. This treatment causes the glass to absorb the heat itself rather than divert it like the more effective and expensive low e-coating glazing. The most common colors are green, grey and bronze, while black is the least common and effective. Tinted glazing is also referred to as heat-absorbing glass.

Transom: The piece separating a door from a window above it.

Transom light: A window sash above a door.

Ultraviolet transmittance: The percentage of ultraviolet radiation allowed through a window.

U-value: The rate of heat transferred through a window. The lower the U-value, the better the insulation.

Wash cut: Cuts in a stone sill made to divert water.

Yorkshire light: A window with a horizontally moving sash and a fixed sash. A type of slider window. 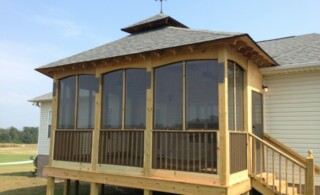 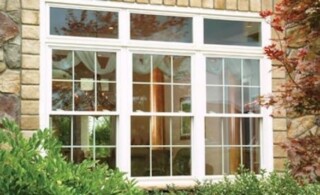 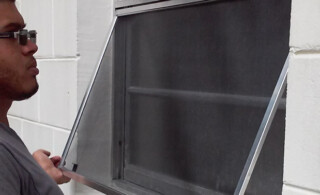 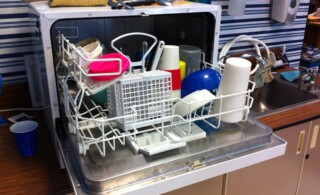 DIY Guide to Installing a Dishwasher 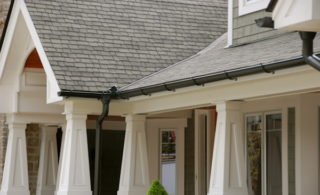