The kitchen is the engine room of modern life. This is the room where families are fueled, stories are shared, homework is done and meals are made.

But the design, usage and social meaning of the western kitchen has changed profoundly in modern times. So, we researched five centuries of kitchen design to see what came before the modern kitchen. Then, we made this series of digital renderings, showing how kitchens looked over the past 500 years.

We started in England, 1520, and traced the kitchen’s journey to America where the story gained pace in the 18th century. To ensure our findings were accurate we worked with historian Nancy Carlisle, Senior Curator of Collections at Historic New England.

Before the modern kitchen range or the microwave, the hearth was the warmest place in the kitchen. But that’s not to say the fireplace didn’t have multiple functions, like later ‘appliances.’ The one in ours was used for cooking, roasting, and heating. The cauldron hanging from the pothook was most likely made of bell-metal (an alloy of copper and tin). Skillets, posnets, and frying pans were made of wrought iron.

The coverable wooden trough on the other side of the hearth was for kneading and proving dough. Tucked behind the firewood rack, you can see the handles of utensils such as a skimmer and a frying pan. The frying pan was common in all kitchens, according to Pennell – the long handle would have protected users from the high flame. Inspired? We have good news: Installing a wood stove costs between $860 and $3,550. 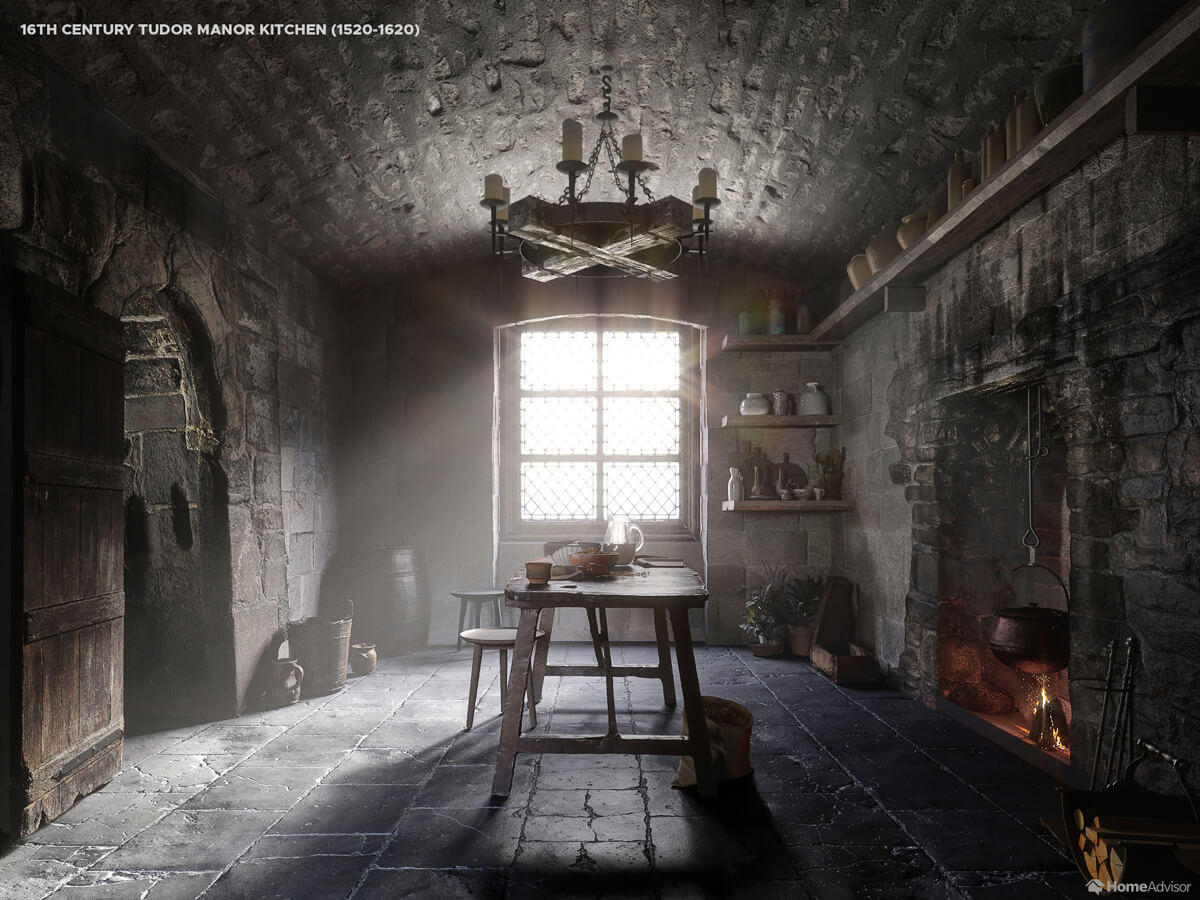 Ah, the mighty kitchen dresser appears! Even modest English households would store and display decorative ceramics on kitchen dressers and mantelpieces in this period. Though authentic 17th century dressers require deep pockets, a handyman service near you can build a custom dresser inspired by the look of the time.

Ceramic teacups and teapots also became common in urban homes. The hearth has come a long way in a few decades, too – note the cast iron coal grate in place of the wood fire.

And the device on the wall above the hearth? It’s a mechanical roasting jack. The cook would wind it up and leave the pulleys and weights to turn the spit in the hearth for around half an hour without the need for manual labor. (Rarely, a ‘turnspit dog’ would perform this duty on a big hamster wheel designed for the purpose – but that’s another story.) 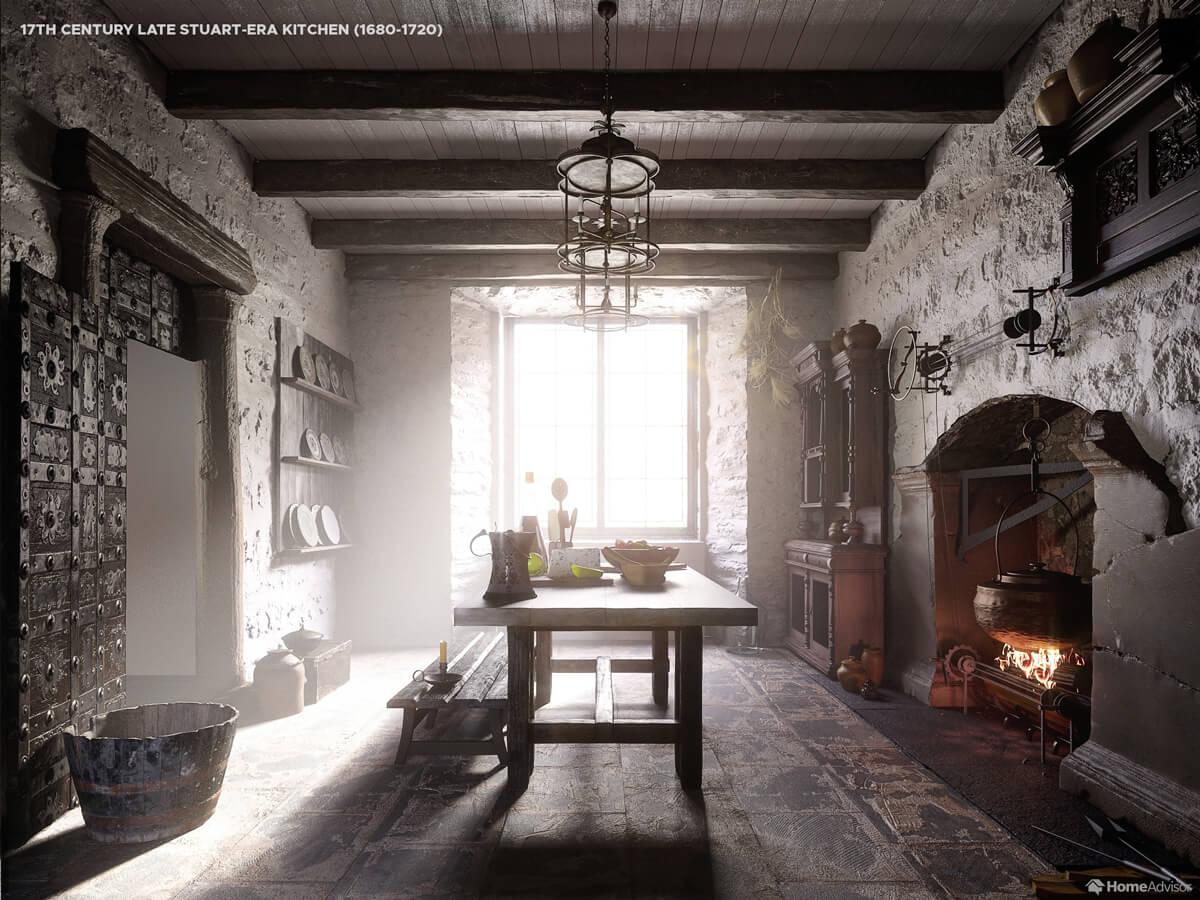 Our journey through the American kitchen begins in Williamsburg, the capital of the Virginia Colony for much of the 18th century. Our Williamsburg kitchen is fancier than kitchens in other parts of the country at the time according to Nancy, thanks to the city’s wealth at the time. The chairs show that it would be a gathering place later in the day.

The hearth is still paramount, but now features a Yankee invention: the swinging iron crane peeking out from the near wall, which the cook would use to safely position pots such as a Dutch oven. Chimney sweeps were vital in keeping the hearth in excellent condition, despite the dangerous health issues associated with the work. The process is cleaner and easier today, and still necessary to maintain the functionality of your wood stove or fireplace. A chimney sweep costs about $250 to hire.

The shelves are stacked with all sorts of useful (rather than decorative) pottery. Some were imported from Europe, some made locally. See the stacked barrels through the doorway? This was a common way to store flour and other food at the time. 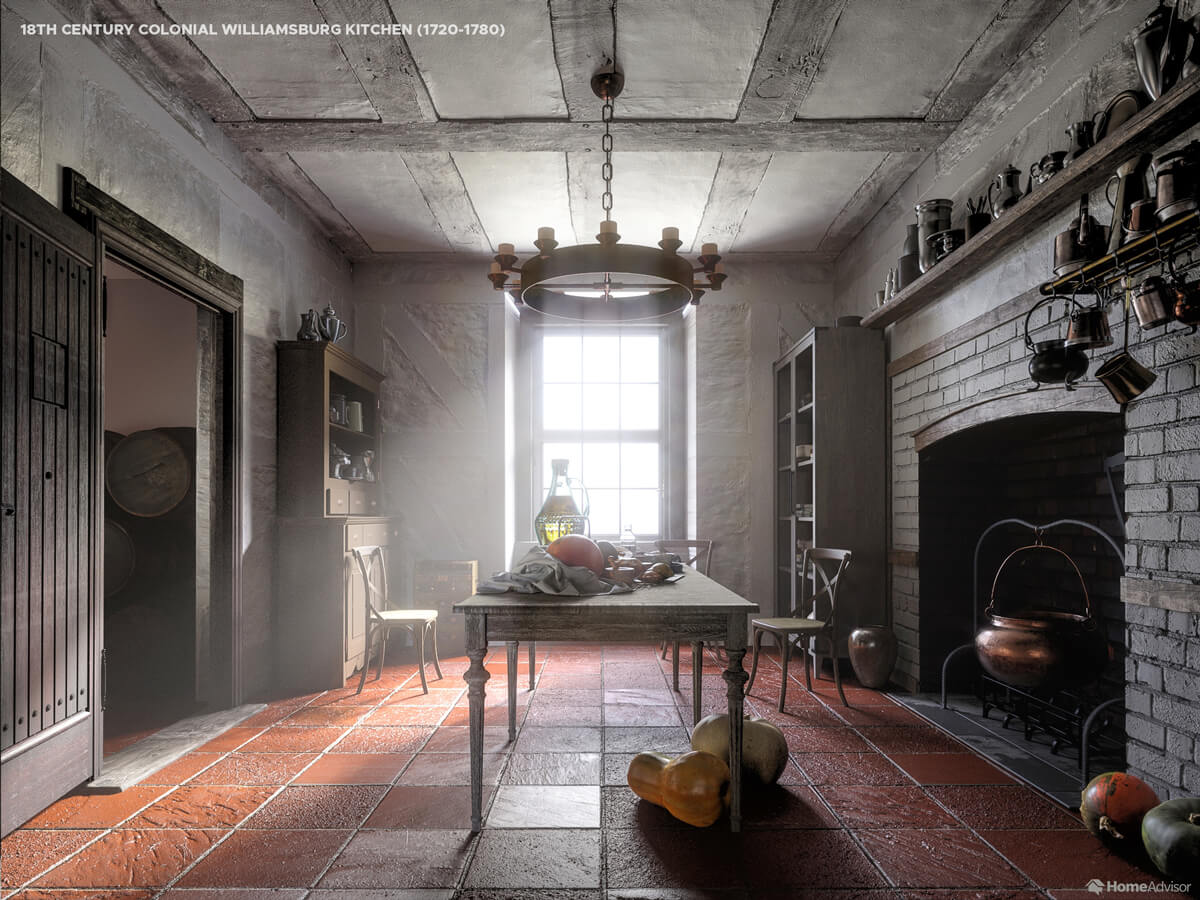 Our 19th-century kitchen is inspired by an educational lithograph created by L. Prang & Co. around 1874. It’s actually a state-of-the-art kitchen for the time. The freestanding wood or coal oven has finally landed! The oven’s stove top saved fuel and also saved the cook from crouching. These days, smart appliances for your kitchen can help you get perfect baking results every time. But back then, the kitchen clock was about to make an appearance, so that cooks could – at last – time their cooking. Can you believe how far we’ve come?

Those cupboards are a precursor of the Hoosier cabinet, an all-in-one cupboard-and-shelves unit that was first marketed in 1899 and was a stepping stone towards the modern fitted kitchen. Kitchen plumbing had also arrived. The kitchen sink was more like a furniture object than an integrated utility at this point – and isn’t that more stylish? 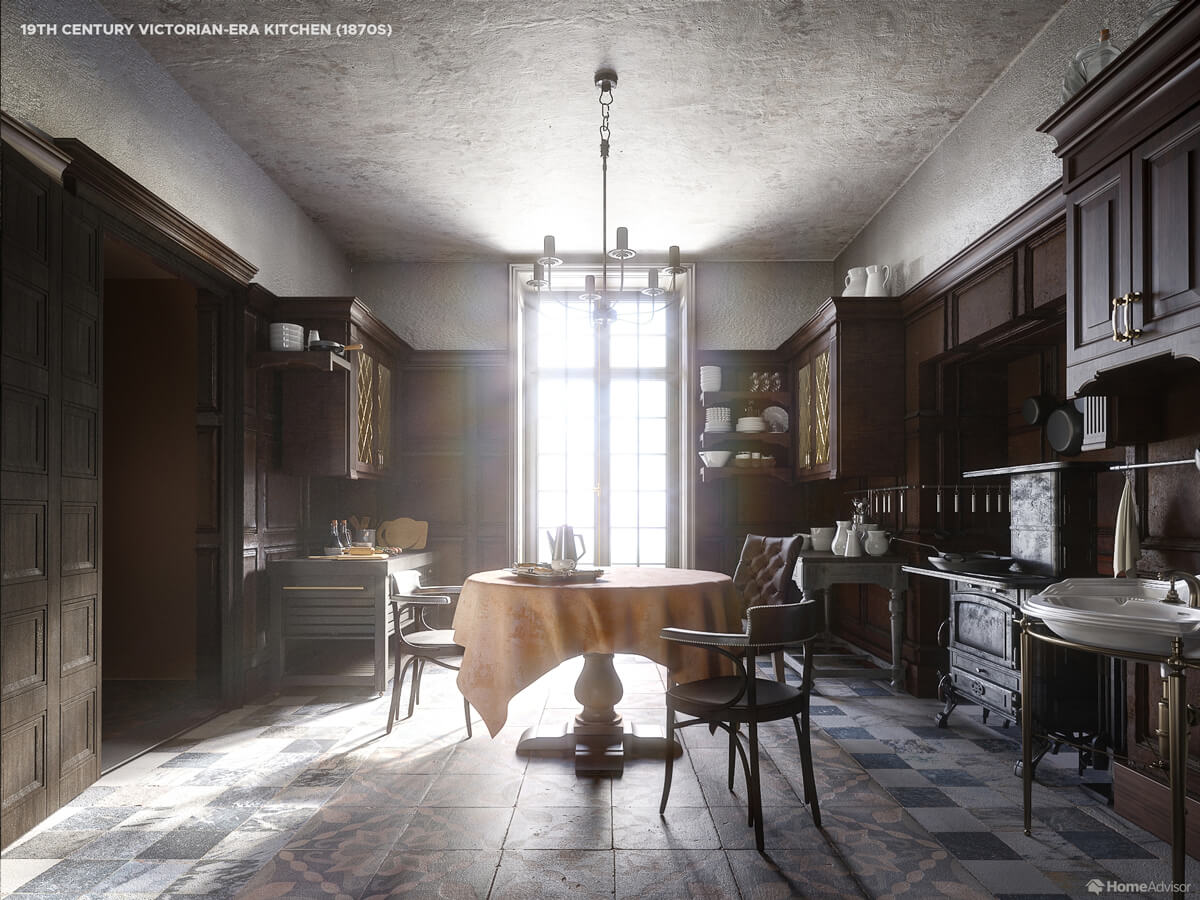 Nearly a century after the Prang lithograph, the whole idea of the kitchen had been revolutionized. Electrical appliances and other conveniences shifted the balance of time and labor that went into feeding a family.

In our 1960s kitchen, it is not just the electric fridge and gas cooker that make life easier. The painted or laminated surfaces and lino flooring make quicker work of keeping the kitchen clean. (Today, linoleum is still one of the most popular types of kitchen flooring.) The copper-bottom stainless-steel pans under the breakfast bar are low-maintenance. And you can bet there’s a plug-in toaster and coffee percolator hidden in one of those cupboards.

Perimeter countertops freed up social space at the heart of the kitchen as food prep became part of ‘entertaining.’ Designer units and utensils were cool. Designing, buying, and using kitchenware were now expressions of consumer freedom and aspiration. 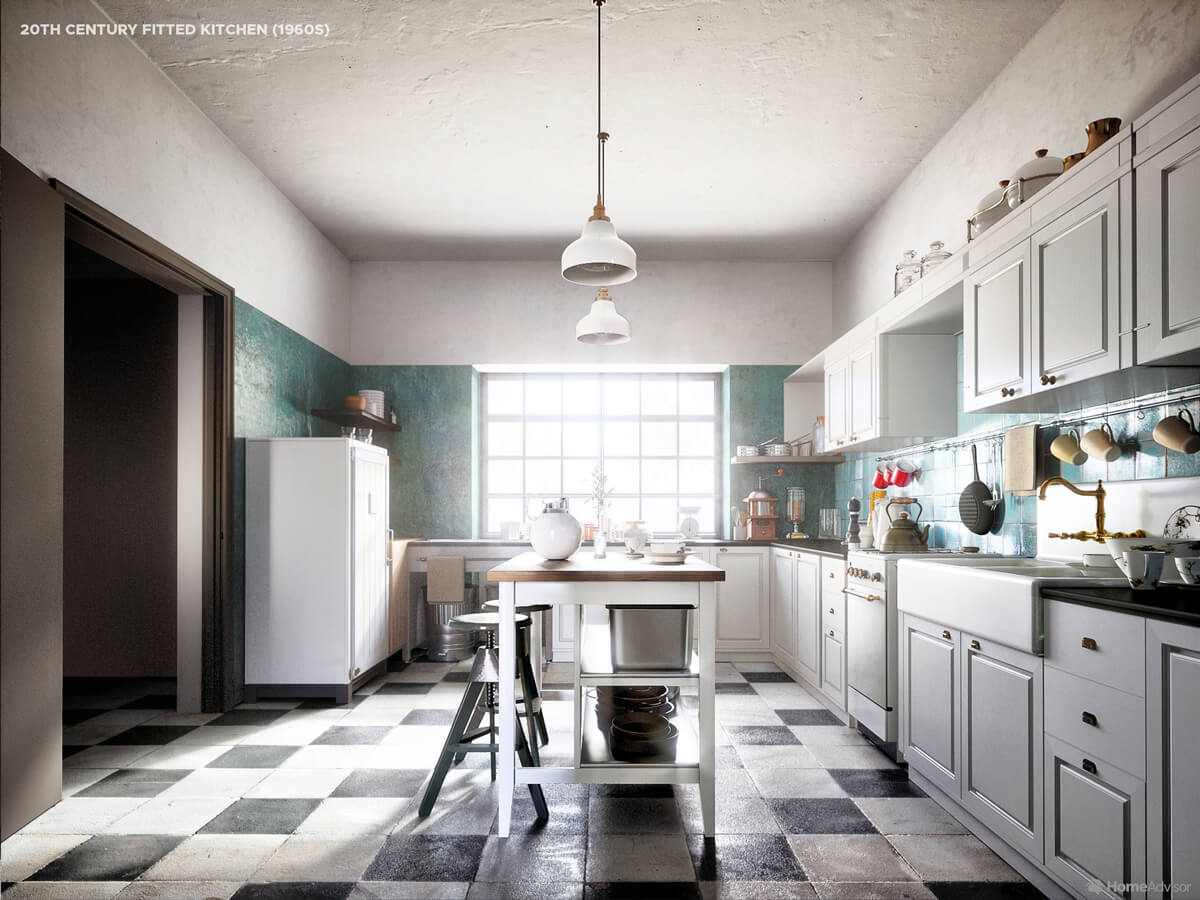 Bright, clean, uncluttered kitchens rule the day in 2020. The exception is the island unit, which prioritizes sociability over clear access. Across the kitchen, the simplicity and stylishness of industrial-style stainless steel and concrete meet strong, classic natural surfaces such as marble, wood or stone.

The modern solutions in our 2020 kitchen are deliberately understated. The induction hob nestles in the counter itself, and the microwave is integrated in a grid among the fitted cupboards. Multiple, dimmable lighting solutions make for a versatile social space – for a lively family meal, a carefully-calibrated study session, or an intimate space to gossip and flirt when it’s time for that house party. Looking to update your own space? Homeowners report the cost to remodel a kitchen ranges from about $13,100 to $37,100. 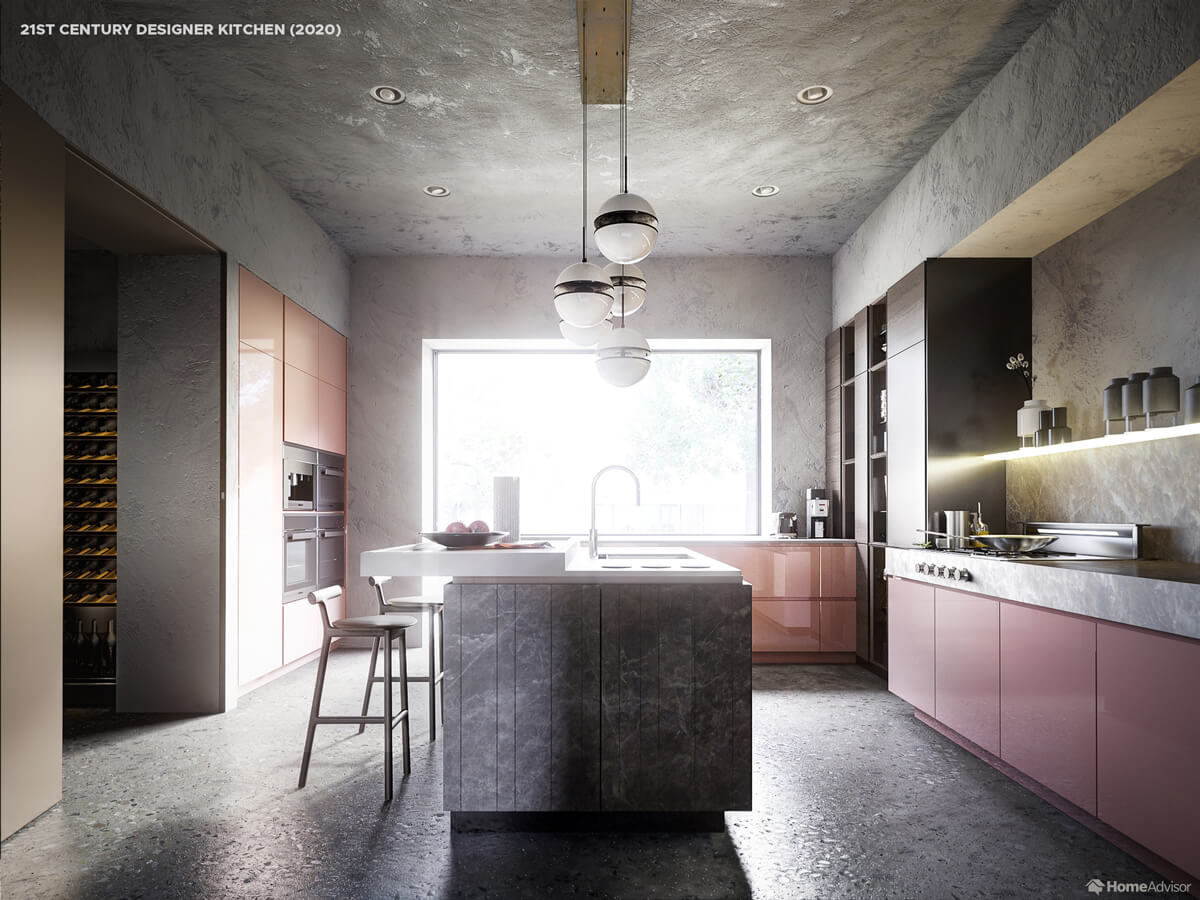 Our 500 year history of living room design is very much a history of artistic movements and avant-garde playfulness. But our 500 years of kitchen design shows that the evolution of the domestic cooking space has as much to do with technology and social progress as it does with aesthetics. Thankfully, with today’s design solutions, it is possible to create a kitchen that is both practical and stylish.

Our researchers began by reading two books: “The American Kitchen 1700-Present” by Ellen. M. Plant and “Birth of the English Kitchen 1600-1850” by S. Pennell. They then used the internet to source images of pertinent details found in the books. Consulting with historian Nancy Carlisle, we identified unreliable image sources among our research, and decided to use the online collections of museums and historical houses to find more reliable images. We had problems differentiating between 1520-1620 and 1620-1720, as the kitchens weren’t that different. Our solution was to shorten the time period and focus on either end of the centuries to make them less similar.

For a full list of the sources used for this piece, please visit http://bit.ly/500YearsKitchenDesign