18 of the Best Homebases & Headquarters from Fiction

What are some of the coolest headquarters in fiction? After a day hard at work fighting crime, causing crime, going on adventures, or simply making a lot of money, these heroes and villains need a calm space to hang their hats and/or helmets. Check out some of the sweetest cribs of the fictional elite. Perhaps you’ll find some fantastic inspiration for your own home base!

Want to skip directly to the full infographic? Click here. 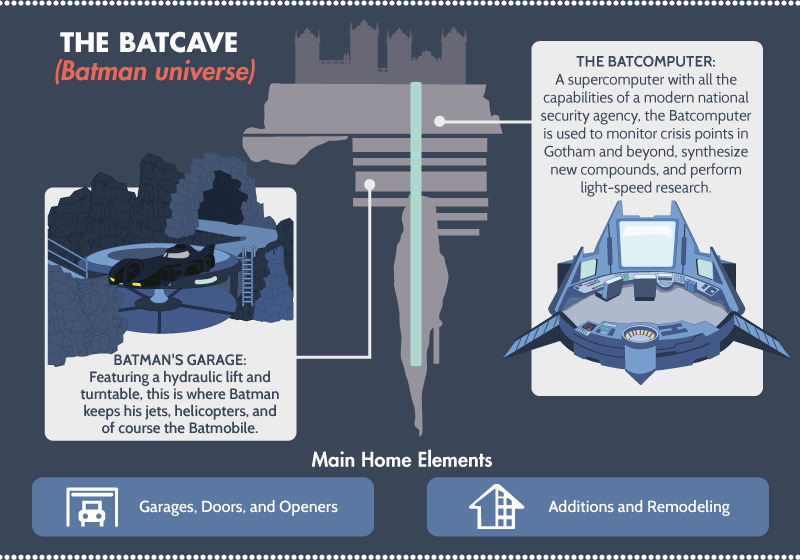 There are many versions of the Batcave, and the dark crusader’s crib has certainly upgraded from relying on a pair of costume-changing bat poles. Today, it stores a supercomputer along with a training station and a non-lethal weapons crafting station (at least, in the latest video game series). It’s a sweet spot for Batman, Robin, and Alfred to relax, but its main function is as a glorified garage, storing amazing rides like the Batmobile, the Batcycle, and the Batplane. In every version, Bruce Wayne has created an amazing addition to his home.

Once the pinnacle of refinement and class in Vegas, this tower now houses a fundamentally immortal person, Mr. Robert House, who gave up his mortal body for life as a supercomputer. It has souped-up roofing decked with protective lasers. It also has a pretty sweet presidential suite. Not bad for a home for a senior citizen. 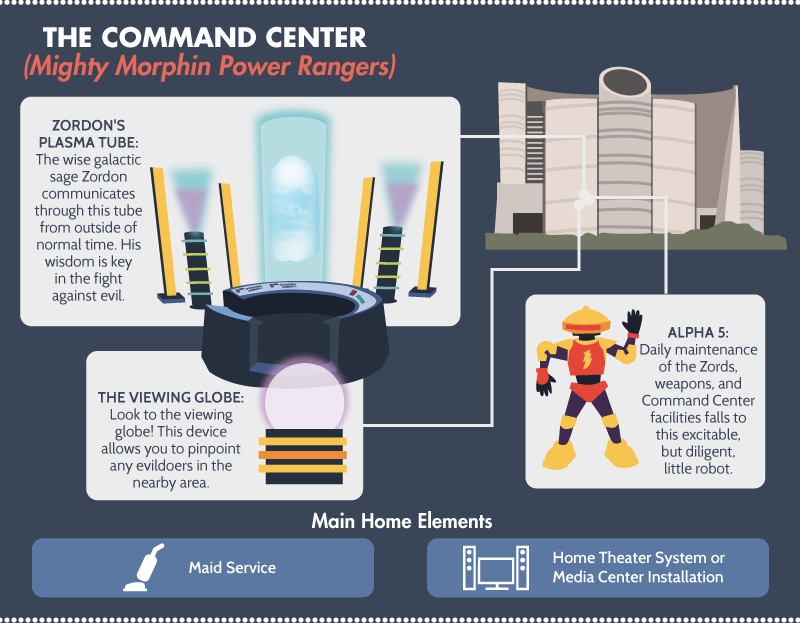 Zordon has a pretty similar situation as Mr. House; however, Zordon is a wise, all-knowing, and beloved mentor communicating through what looks like a big entertainment center, contained in a fluid of the purest good energy in the universe, and not a paranoid and Machiavellian leader of a mindless army. (Or is he?) Another difference is the fact that Zordon also has Alpha 5, who performs really excellent maid services. When the Power Rangers aren’t go-going, they’re probably hanging out either at high school or in this interesting home away from home. 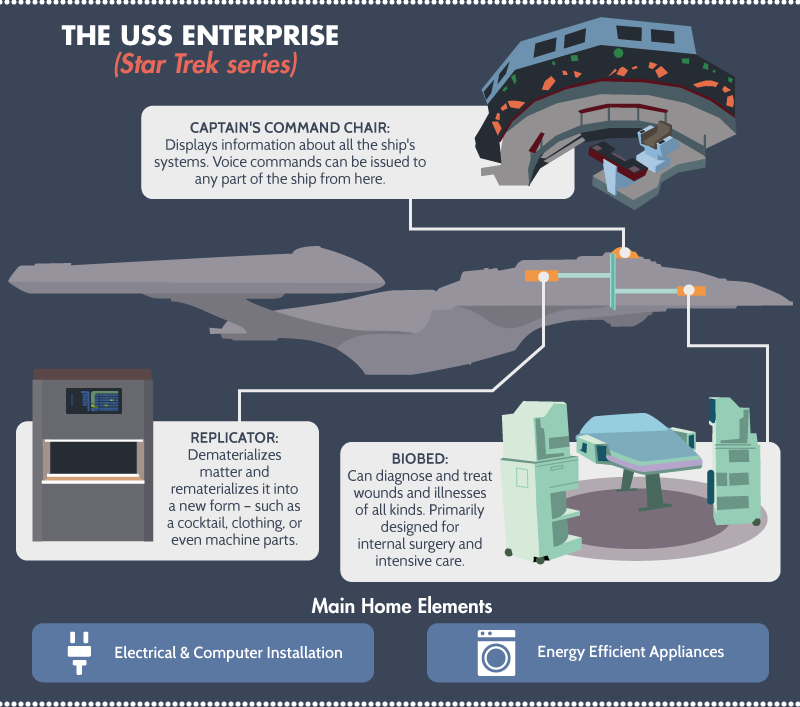 How much cool stuff is packed in the command deck of the USS Enterprise? (Oh, no, Trekkies, you don’t have to actually tell us. That was a rhetorical question.) We might not know what every plastic button Sulu pressed does, but we do know that this thing had supercomputers installed, which were powered by some sort of matter-antimatter chamber, making it the ultimate energy-efficient appliance!

The End of Time 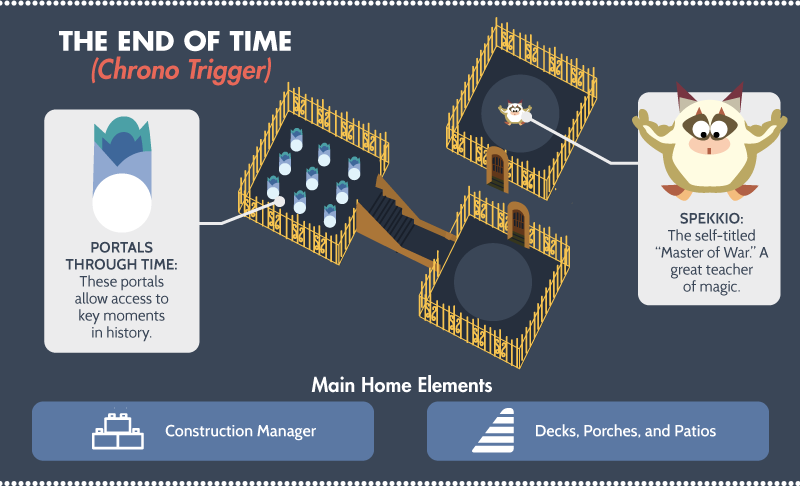 Where do time travelers go to hang out? They chill in this remarkably simple landscape, it seems. At the end of time, Gaspar somehow managed to construct a small home, complete with a courtyard and deck. It’s a nice, blank space to relax after a bit of saving history. Here, Chrono Trigger players can save, heal up, talk to party members, learn new magical skills, and go through more portals.

The Fortress of Solitude 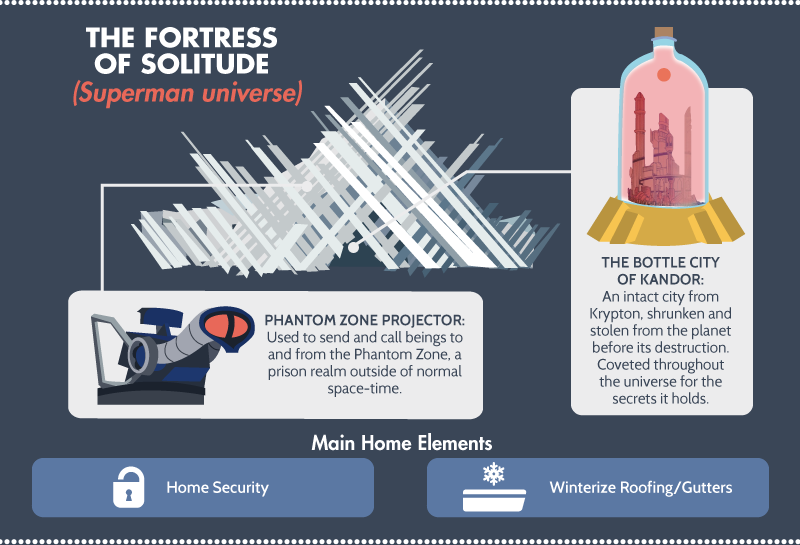 That garage, shed, or corner of the house where you go to be alone pales in comparison to this man-cave hiding somewhere, possibly in Canada. (In all seriousness, though, it’s likely in the Arctic. We have no idea how much Clark Kent spends on winterizing!) This is where Superman goes to be alone, but as it just so happens, he gets bothered there fairly frequently by both friends and foes. That’s fine, though, because it has a few security systems in place, depending on the comic. 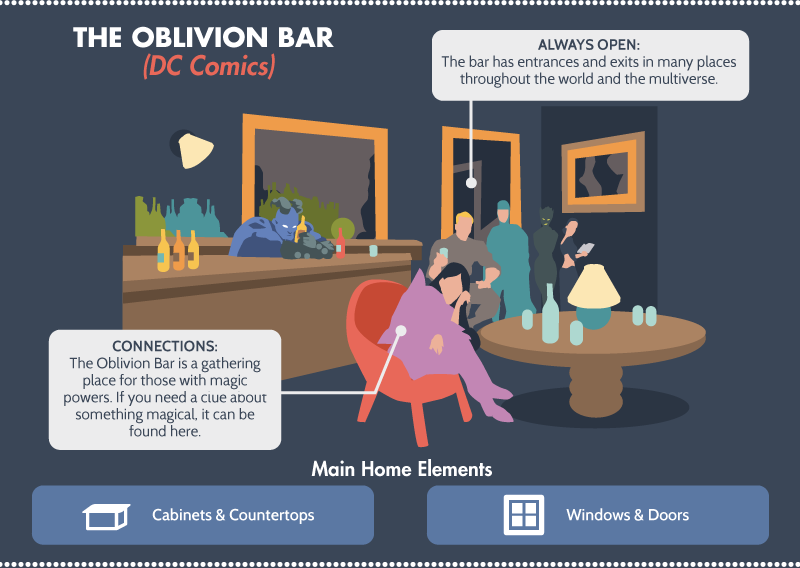 It’s time to chill out in a pocket dimension with cool magical beings in a comic book fan’s fantasy. It’s probably similar to what any underage drinker hopes bars will be like. Short of Gotham City Lounge in Brooklyn, perhaps, there’s nothing really like it in this universe. As long as you have magical abilities, their door is always open. Just don’t spill wine on the countertops. 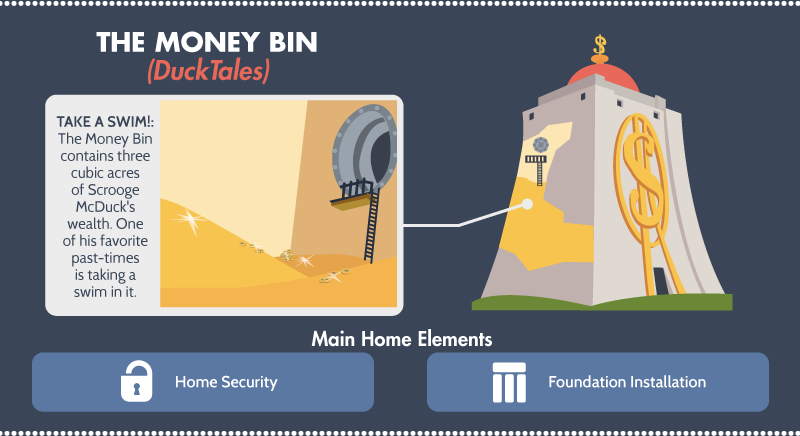 We know that this song is probably now in your head. You’re welcome. But this is indeed an amazing structure, built with very effective safe security that consistently protects it against numerous break-in attempts. It all seems like it could be folly, though: The Money Bin apparently sits atop a fault line, which would prove problematic if an earthquake were to occur. That’s something to consider when putting down your foundation. 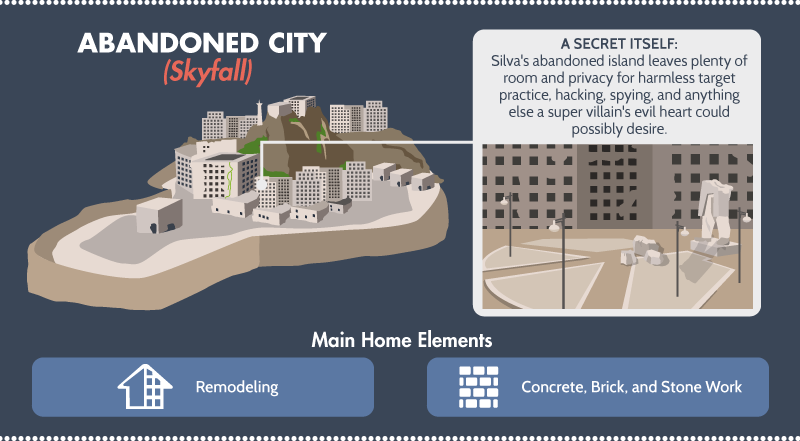 The abandoned city in Skyfall, which is actually Hashima Island in real life and has an amazing story in its own right, is the stomping ground, sometimes literally, of the villain Raoul Silva. Made of mostly concrete, it’s quite the remodeling project and a great creepy spot for a Bond villain to sit, stew, and come up with needlessly elaborate plans. 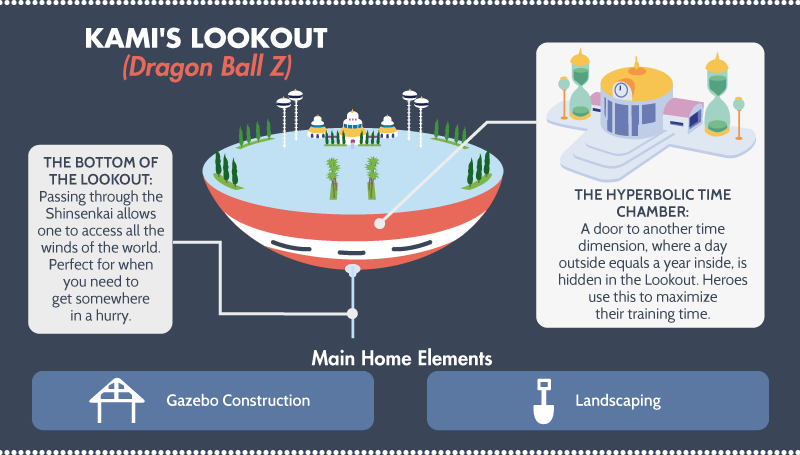 If you’re an incredible fighter looking for someplace to heal, stop physics for a while in a magical gazebo so you can train for hours without time passing, or perhaps fuse with your buddy using a rather bizarre dance, then Kami’s lookout is the place for you. Oh, we should mention this, though: You need to be able fly to get there (or at least jump really high), as it’s stationed in Earth’s orbit. That won’t be a problem, will it? Once you get there, it will be worth it. The zen-like landscaping is very relaxing. 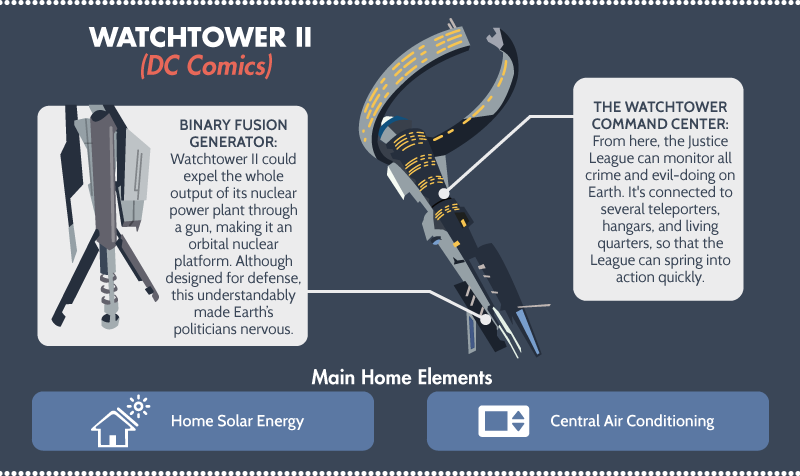 Home of the Justice League, this superhero headquarters also hangs in orbit around Earth. The watchtower project is one of those things Wayne Industries mysteriously invested in, twice. (So no one in Gotham can figure out that he’s Batman?) Likely powered with solar energy, this satellite houses a weapon called a binary fusion generator and a training room called “The Kitchen” after the famous phrase, “if you can’t stand the heat, stay out of the kitchen.” Perhaps they should invest in some air conditioning for it. 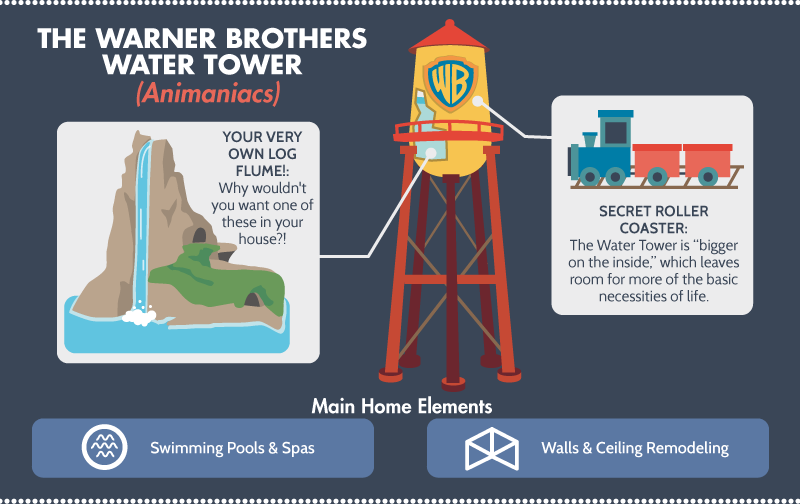 Out of every fictional home and headquarters on this list, nothing bends time and space quite like the base for the chaotic Animaniacs. Somehow it contains all of this within a tiny, tiny tower with a very small ceiling: three beds, a kitchen, a bathroom, a log flume leading to a swimming pool, and a roller-coaster. 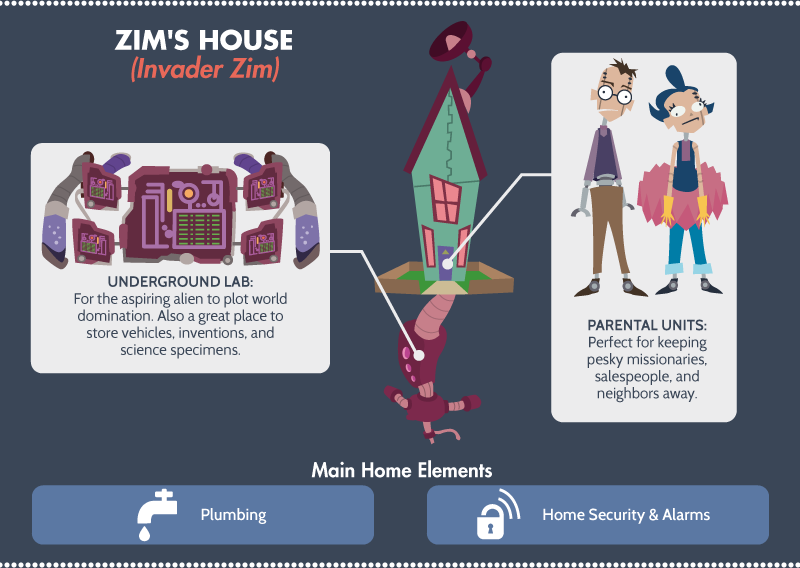 It’s a lot to get done: Pretend you’re a normal kid with a normal house, along with fake parents, while hiding all of your alien equipment in the plumbing. With pipes that seem to suck up the power of the nearby houses, little gnomes in the yard to make it appear comforting and normal, and a security system to boot, this home of Zim and dog/robot GIR is very secure. In it, they can avoid Dib’s attempts to thwart their plans.

The Room of Requirement 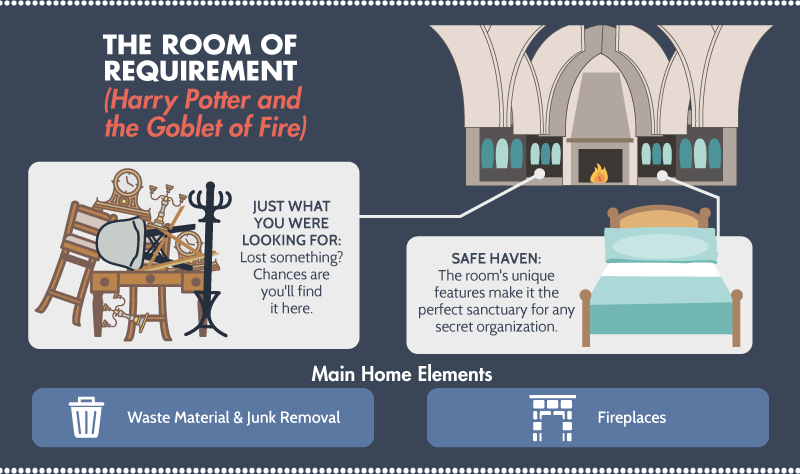 Though the Potter crew uses this room as the home of their illicit after-school club, Dumbledore’s Army, this magical, ever-changing room has been many things to many people, including, at one point, a collection of chamberpots when Professor Dumbledore needed a bathroom. Most of the time, this becomes the storage place for a bunch of junk when one needs to hide things. Perhaps Dumbledore should’ve called a junk removal company. In the films, the magical Room of Requirement is most recognizable for its mirrors and fireplaces. 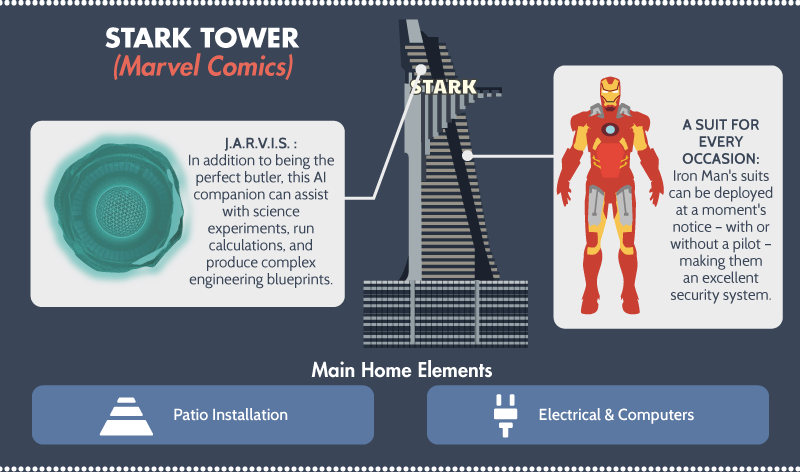 You have to admit that this place has a really cool patio. Whether you admire the electrical equipment it uses to take off Stark’s suit or the perfect butler the house comes with named J.A.R.V.I.S., Stark Tower is a towering beacon all would-be billionaires look up to.

Mojo Jojo might be a villain, but even he appreciates a clean energy source: He uses the geothermal power of a volcano. We don’t recommend it, since it might go off at any moment, but then again, so might his personality. Also, a telescope makes the perfect skylight. Mojo Jojo, with his very verbose speeches and his inability to thwart three little girls made of sugar and spice and everything nice, isn’t so bad of a bad guy, we think. 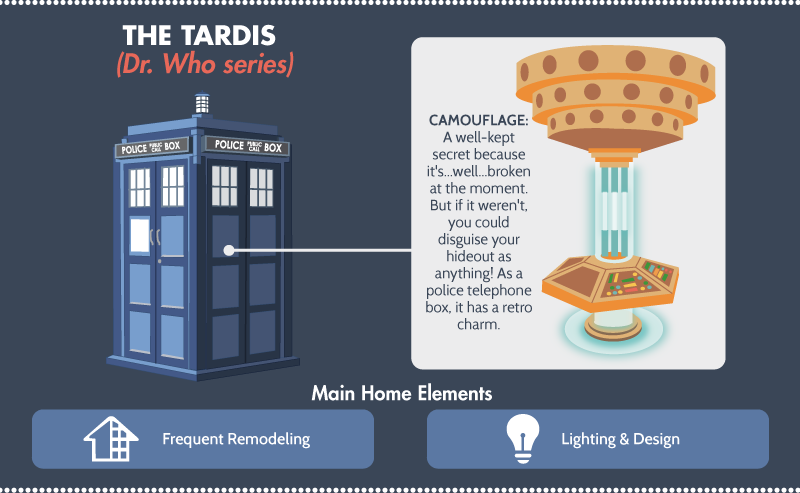 The Time and Relative Dimension in Space, or TARDIS, has been the object of much fan love and obsession. Able to “see” all time and space at once, the semi-sentient, famous police box can actually form any shape at all, which is quite the remodeling project without any actual remodeling. The unique design means that its interior is bigger than its exterior (which has nothing to do with the budgetary constraints of a primarily public-funded show, we’re sure). 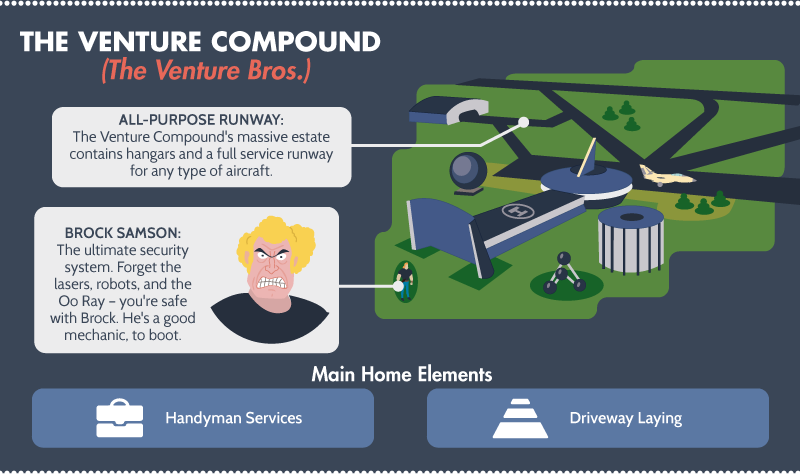 Home of Venture Industries and a hangout spot for those troublesome Venture brothers, Dean and Hank, this compound contains quite a few things a scientist could need: a kitchen, a pool, a living room, an underground tunnel, a manufacturing wing, a cloning lab, a driveway that serves as a landing pad for all of your crazy vehicles (except, perhaps, your boat), and a murderous body guard and handyman named Brock.

18 of the Best Home Bases in Fiction – The Full Infographic