The Modern Cost of Iconic Landmarks 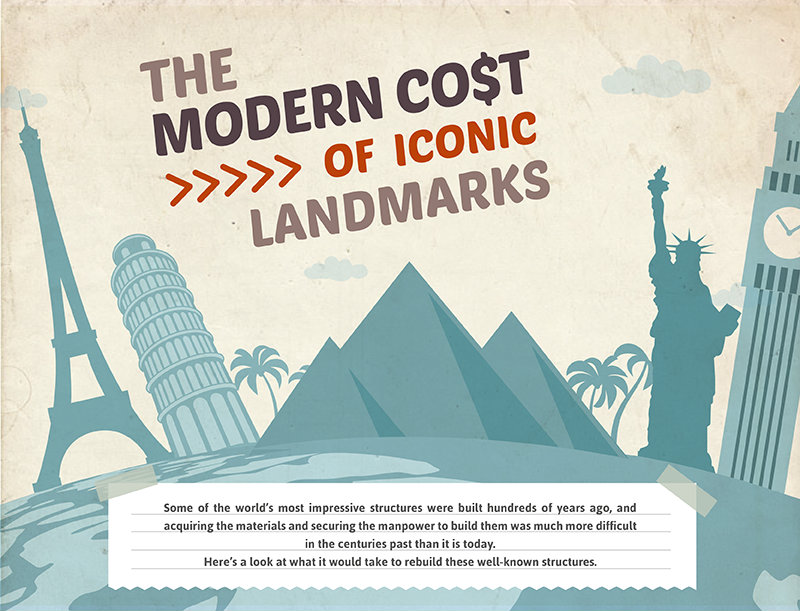 Mankind has proven its undeniable desire to build amazing things. In rare cases, people have built something so incredible, so substantial, that it stands out as one of the world’s true iconic landmarks. What’s more amazing is that many of history’s most significant structures were created well before any of the machinery that makes modern engineering possible. With so much having changed over time, it’s enough to make one wonder: How much would it cost to build these landmarks today? 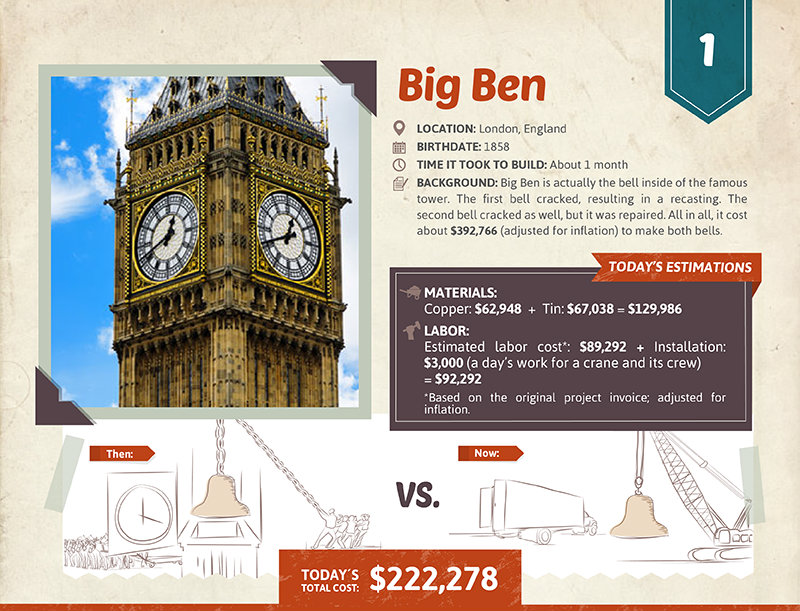 At its original debut, the installation of Big Ben must have been quite a spectacle. It took 30 hours to manually hoist the bell up and into place, but not before it was paraded through the streets behind 16 white horses for everyone to see. And while perhaps not much has changed in the way of bell making, the heavy lifting would now be done by a crane, making short work of the process. Today, such a bell could be delivered by truck and installed quickly enough that busy city goers might not even notice. 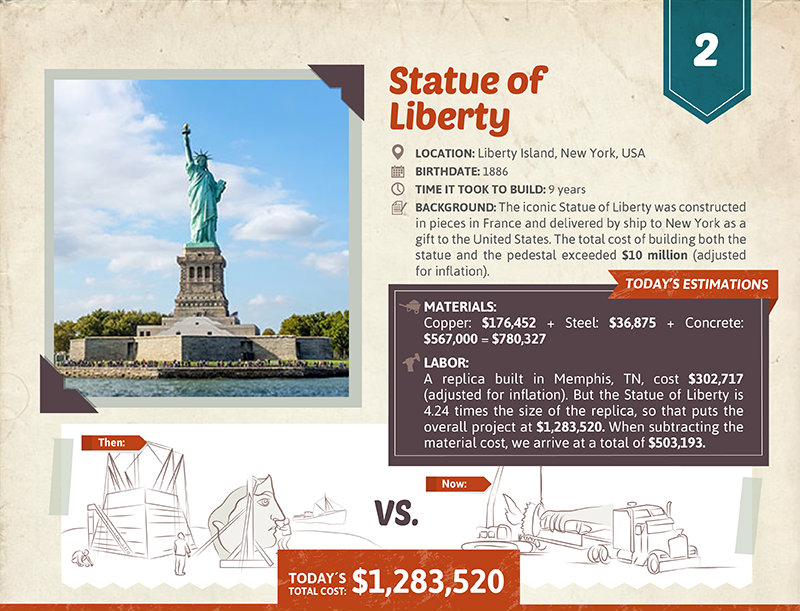 The Statue of Liberty is one of New York’s most famous landmarks. It sits on Liberty Island in New York Harbor, and the statue towers over the surrounding area. The statue rises a total of 305 feet off the ground, with the pedestal accounting for over half of that height. The base was constructed on the island while the statue was being built in France. The main benefit of building such a structure today would be the advanced heavy machinery that would allow for installing larger pieces of the statue at once – at a much faster rate than before. 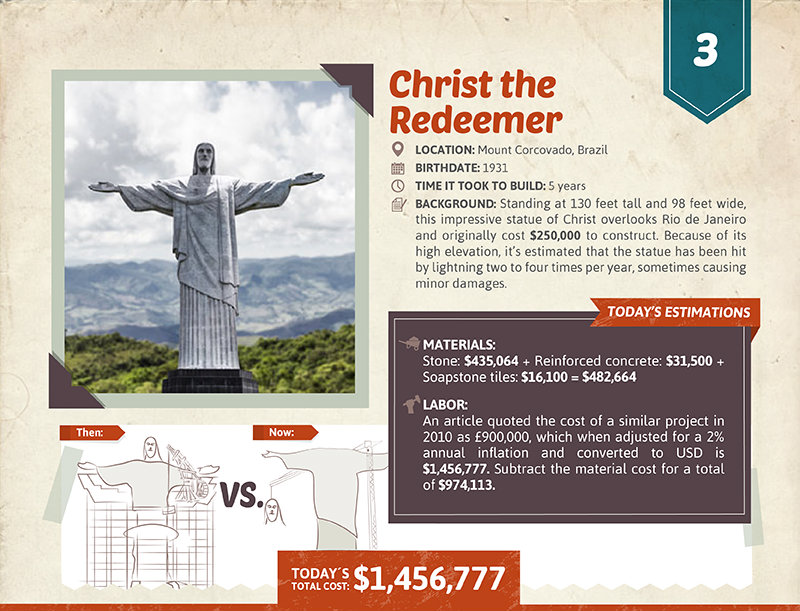 Christ the Redeemer towers over Rio de Janeiro, and the most popular images of the statue are aerial photos, taken to capture the beautiful scenery that surrounds it. From these distances, it’s impossible to see the thousands of soapstone tile fragments that create the structure’s monochromatic mosaic. Fortunately a walkway provides a convenient path for locals and travelers to get an up-close experience of the statue. 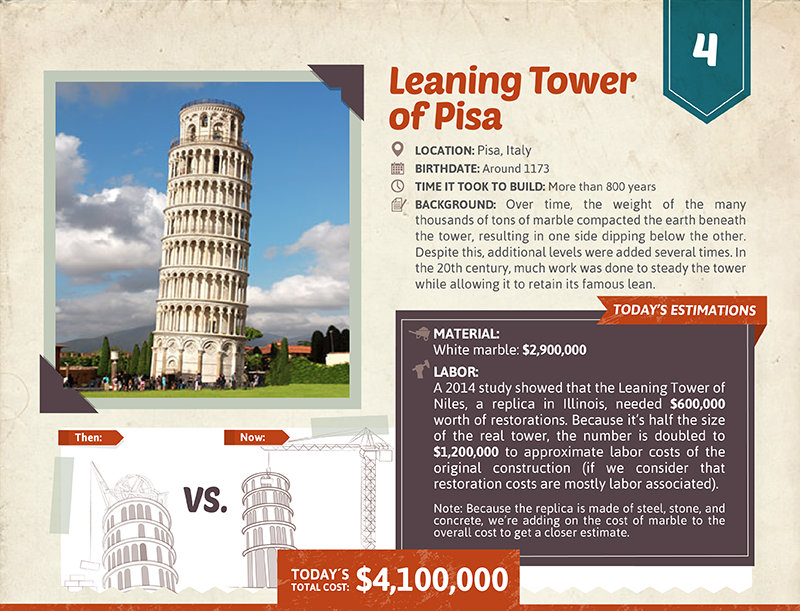 In what must be one of the more miraculous survival stories on this list, the Leaning Tower of Pisa still stands defiantly after years of leaning off-kilter. The tilting effect wasn’t caused by any deficiency in the tower’s structure but by the slowly sinking foundation that it sits upon. While it would be quite a bit easier to build such a tower today with all of the heavy machinery and advanced architectural computing capabilities, the natural lean of the tower is something that will be forever unique to the original, and it’s what makes it the popular destination that it is today. 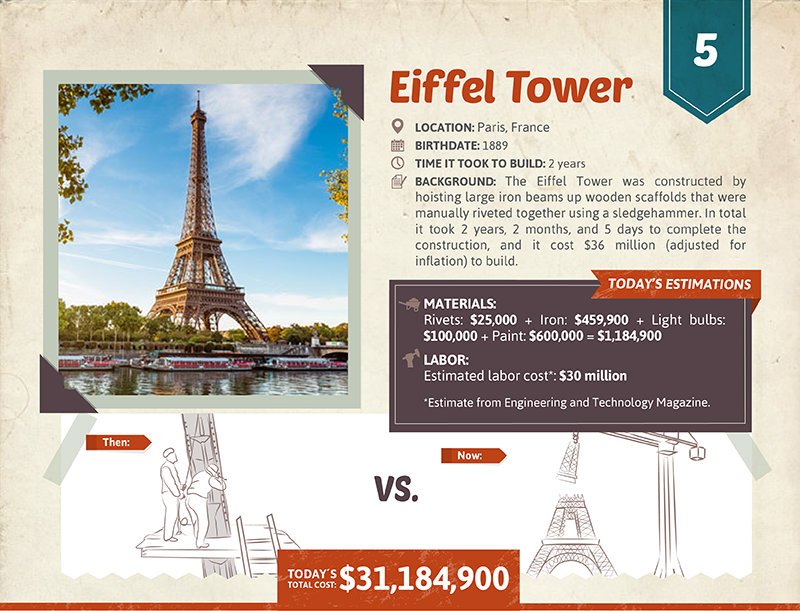 Like most anything built in the 1800s, the construction of the Eiffel Tower required a lot of manpower and physical labor. Without the use of modern technology, workers were able to take iron beams, rivets, and a whole lot of paint and turn it into one of the world’s most recognizable structures. All that heavy lifting paid off, too; the tower stands proudly in place to this day, needing only the occasional paint job. Today, not much would change in the way of its building materials, but you wouldn’t see anyone sledgehammering rivets between pieces of iron, and the use of a giant crane to hoist prefabricated sections of the tower would surely speed up the process. 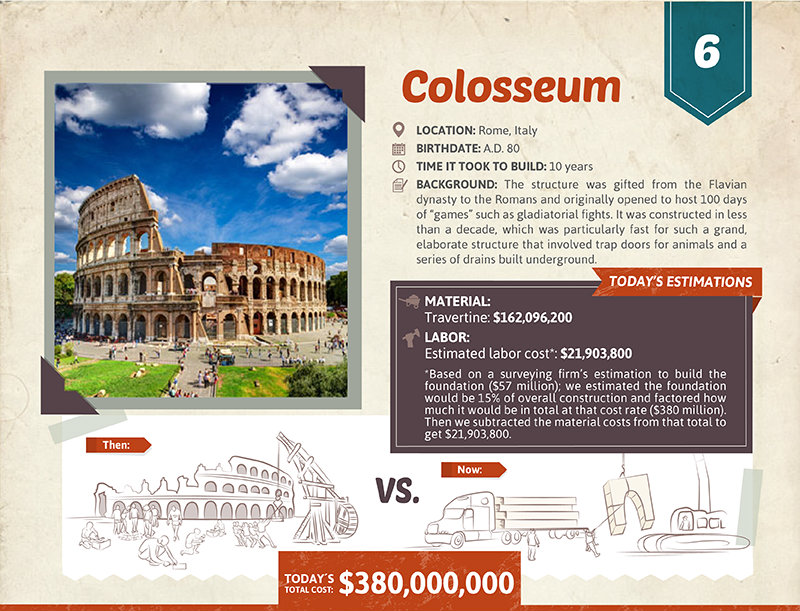 This project was so insanely ambitious that it’s hard to conceive of it ever having been built. Yet there it stands in Rome, undeniably awe-inspiring. While time has taken its toll on the structure, the historical events that took place there will live on forever. Less glamorous, but perhaps more important, is the advanced technical skill demonstrated by the ancient Romans. Imagine having teams of both specialists and general laborers dedicated to specific tasks, such as carving statues or building arches. This type of arrangement is common today in factories that utilize assembly lines. There was a tremendous amount of physical labor involved in the process. This might be the most notable change if it were built today; machinery would significantly reduce the manual mining, shaping, shipping, and building. 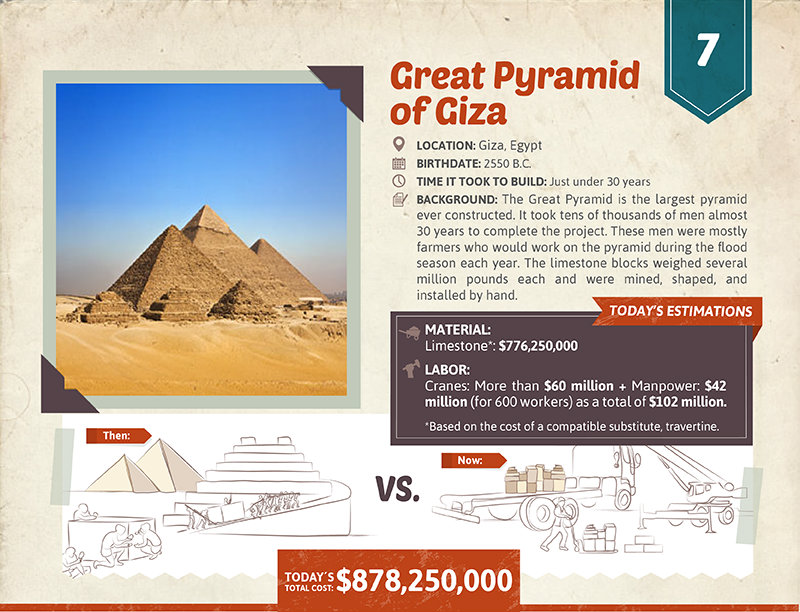 The Great Pyramid of Giza is arguably one of the most impressive designs ever built by man. Even by today’s standards, the scope and precision of the build are remarkable, yet it was over 4,500 years ago that the foundation of this pyramid was being laid. Imagine a workforce that could total up to 100,000 men. It would have taken this many people to push, pull, drag, and lift the massive building blocks into place at a rate fast enough to build the Great Pyramid in only 30 years. The cost to construct it today would be astronomical, and even with the most advanced equipment it would be a significant undertaking.

A Strong Will to Build

These iconic landmarks serve as a sort of snapshot that preserves a bit of what it was like to live during a certain time and place. They prove that people will overcome countless obstacles when it comes to creating and building great things. And while modern technology certainly would have made the processes easier, it’s never been a limiting factor for any of the structures on this list.