A Tribute to Video Game Architecture 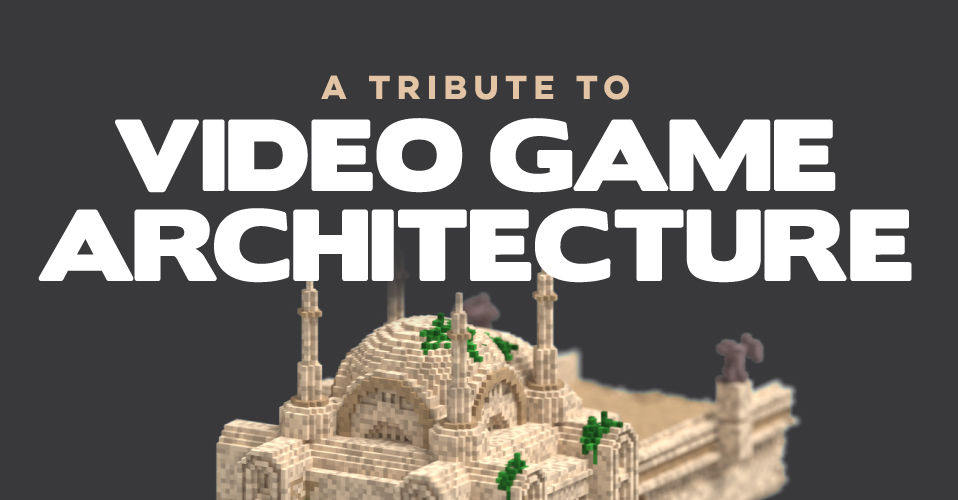 A society’s architecture is said to define the way its people want to live. But in reality, the built environment is created by a select few, beholden to political and economic concerns of the powers that be. The rest of us turn to fiction to realize our dreams, fears, and fantasies – and no art form quite simulates the freedom to explore our environment as well as the realm of video game architecture.

Video game designers aren’t bound by the same physical limitations as real-world architects. They can use any material that exists or dream up new ones; their buildings can be static and imposing, or change in time, playing Escher-like tricks on their gamers.

But while real-world architects often talk about the ‘narrative’ in their work, with video game architecture narrative is more than an ideal: it’s a creative limitation. Video game buildings must be compelling. They must pique curiosity. And their designer needs to ensure thematic consistency within each platform, room, building, city. A video game designer is architect of an entire universe.

We love the dream world of fictional architecture at HomeAdvisor. Following our redesigns of the Simpsons’ home and the Empire State Building, we wanted to celebrate the architectural achievements of some of the most popular video games around – reducing each to a simple computer game inspired voxel style to emphasize the structural details of these tiny, epic works of art.

Across thirty years, 15 games, and assorted spin-offs, the Final Fantasy universe has been nothing if not eclectic – blending textures from Arthurian legend, Middle Eastern mythology, and Japanese history. Players are invited to battle evil in exaggerated structures ranging from the baroque or gothic to a more organic or bio-architecture style.

The recurring purple-and-gold scheme reminds us this is FF, wherever on the scale of ‘Hayao Miyazaki to Caspar David Friedrich’ the various games’ designers ended up. Regular art director Yusuke Naora has even said that the city of Midgar was inspired by a pizza – and if he was referring to its tiers and slices, he might also have meant the game’s toppings, artfully mismatched and always satisfying.

BioShock’s art deco-style fulfills multiple functions beyond creating a unifying underwater world. The curves and colorful geometric forms evoke the utopianism of the 1950s (when the city of Rapture was built) and the faded opulence and lavishness of the 1920s boom. It draws us back through time towards the proto-steampunk of Jules Verne’s subaquatic tales.

Luxurious yet eerie, flowing yet monumental, the buildings of BioShock critique the mistakes modern society. It’s no surprise that designer Paul Hellquist was influenced by early 20th-century artist-architect Hugh Ferriss, who celebrated the murkiness of the new metropolises in this quote:

“There are occasional mornings when, with an early fog not yet dispersed, one finds oneself, on stepping onto the parapet, the spectator of an even more nebulous panorama. Literally, there is nothing to be seen but mist; not a tower has yet been revealed below, and except for the immediate parapet rail (dark and wet as an ocean liner’s) there is not a suggestion of either locality or solidity for the coming scene.”

3. The Legend Of Zelda

Starting out as an 8-bit Nintendo adventure game, Zelda has been described by the game’s author, Shigeru Miyamoto, as a “miniature garden that [players] can put inside their drawer.” He drew inspiration from his own sense of mystery and adventure as a child exploring the forests and caves of his youth, and so it is that each of Zelda’s structures comes unannounced: the player feels that they discover them like the ruins of Angkor Wat or Machu Picchu part-buried in nature.

A signature building, in this regard, is Sky Keep – one of the game’s most complex structures, kept hidden literally at the buried roots of the Goddess Statue, waiting to be plucked into the light for countless years.

If the storylines of Assassin’s Creed tread the line between science-fiction and fantasy, the settings are founded in reality – to the extent that the game’s designers employ architectural consultants to ensure the buildings of Ptolemaic Egypt or Renaissance-era Rome are as authentic as they are playable.

That said, you’ll note that the game’s buildings expand over many floors, regardless of historical accuracy, a compromise made to promote the parkour and urban exploration facets of the series.

There are no short-cuts in the Half-Life games: the play takes place in real time, and the player journeys from location to location without cut-scenes or ellipses. While this makes the potential to drift endless, the game’s designers cleverly guide the player with gentle ‘nudges’ like those we find in ‘real world’ urban planning but with a more cinematic approach to guiding the eye – for example, with a sudden flurry of unexplained bird business.

The realistic approach to a selection of deliberately unfriendly Earth-buildings such as the city train station in HL2, is made even more chilling by the addition of ‘realistic,’ weathered additions to the landscape by invading aliens.

A post-apocalyptic RPG with a sense of humor, the gravity of the characters’ situation in the Fallout games is relieved by a light touch in the visuals. The look is closely inspired by the ‘Raygun Gothic’ aesthetic, itself an amalgam of atomic-age re-interpretations of classic art deco colors and curves.

As with the geometric design of BioShock, Fallout’s look was partly the result of the relatively low processing demand of more simple graphics, but the result is unique and fits perfectly. Note in particular the first episode’s cathedral, a simple, ribbed, smooth-cornered quasi-sphynx, far more unnerving than the classic gargoyles-and-pointy-bits gothic church of hackneyed horror films.

Exploration is at the heart of Dark Souls, with visitors to the kingdom of Lordran deliberately given limited information and encouraged to find their own way to the truth(s) of this spiritually-charged fantasy world. Death stalks the buildings of Lordran.

Hidetaka Miyazaki’s game architecture may be inspired by the monochrome castles and cathedrals of Europe but Miyazaki’s versions seem to have been drained further of any color or lifeblood. The hive-like, multi-tiered structures are a gothic re-imagining of the Japanese metabolism movement, a utopian architectural style that quickly faded leaving hundreds of tomb-like living-pods in its wake.

Whether colorful and quaint or gloomy and imposing, great video game architecture draws in the curious visitor for an experience that exceeds mere ‘gameplay.’ Which of these digital worlds would you most like to explore?

Tach, D. (2017). Zelda Breath of the Wild guide: Everything you need to know about shrines. polygon.com