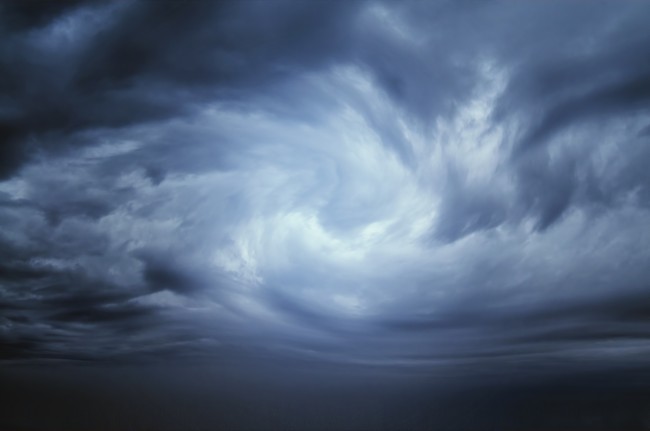 What Is a Hurricane?

Hurricanes are not the same thing as tornadoes. Many people falsely believe that hurricanes are simply tornadoes forming over the ocean. In fact, the only thing the two have in common is that they are both swirling, destructive columns of air. The main differences between hurricanes and tornadoes are:

Hurricanes form when low-pressure systems evaporate water from the ocean. As the vapor rises, it is normally carried away by winds. When no winds are present to carry the vapor away, it begins to spiral inwards on itself and forms a hurricane. As it spirals inward, it forms its own wind to draw up more vapor and send it inwards. (If they were near the jet stream, the winds would carry the vapor away and prevent the hurricane from forming.)

Hurricanes, like tornadoes, are defined by categories on the “Saffir-Simpson scale.” This scale measures the potential for damage caused by hurricanes, based on the strength of the sustained winds. (Sustained winds are those that last one minute or more.)

What to Do Before, During and After a Hurricane

The best way to survive a hurricane is to be prepared. Many organizations, such as FEMA, offer tips and information on how to prepare yourself and your family for the event of a hurricane. It’s best to educate yourself is long before the hint of a hurricane. There will be no time to sort it out after you’ve gotten the warning.

If you are not evacuating, be sure to do the following:

It’s not necessarily over when the winds stop blowing. You’ll still need to take steps to ensure your safety after a hurricane.

There isn’t a single place in the United States that doesn’t periodically experience some kind of natural disaster. Therefore, a basic emergency kit is a must for every home. A basic kit includes:

Also useful to keep near your survival kit is a water-tight case, such as a small, portable safe, to keep valuables and important documents (birth certificates, insurance documents, pink slips, financial documents, etc.). When you grab your survival kit, grab this container as well.

Infants will have their own certain needs. If you have an infant, be sure to include the following in your emergency kit:

Older adults may require a few specialty items in their kits as well:

If you have a handicapped family member, take note of their special needs and include any medications or disposable supplies (catheters, adult diapers, wipes) as well as any equipment they may need in easy reach. Be prepared to help them quickly get to safety.

Some goods in your emergency kit will have expiration dates. Use them normally when there is no storm. This way, you can circulate them out before they expire. Always remember to restock them as if they were in your cabinet.

It is of utmost importance that your children know and understand the seriousness of a hurricane. Left to their own devices, very young children may not grasp just how bad a hurricane can be, and older children may downplay it — especially if they have never experienced a truly scary one before.

Conduct regular drills. Once a month is a good frequency for those who know what to do. With small children, treat it as a game with a reward for doing things properly. With older children, you might allow them to invite their friends over to join in. Whichever the case, be sure to openly talk about how knowing what to do during a hurricane can save their lives. It might be tempting as a parent to shelter your children from the darker aspects of such a disaster, but it will help them better understand the importance of preparedness if they know the gravity of the situation.

If someone in your family is having trouble with any part of the plan, look at the situation and address it gently with the individual. Perhaps a child’s emergency kit is too heavy, or your teenager’s kit winds up stuffed in the back of their closet and is difficult to get to. Work with them on a solution to ensure their safety. Your child may have too many toys stuffed into their kit, or their extra clothing may just be too heavy. Your teenagers may need to find another place to store their kits within easy reach. The important thing is that they understand the importance of getting to safety quickly and with their emergency kits.

What is the difference between a hurricane watch and a warning?

A hurricane watch advises us that the conditions are right for a hurricane to form. Weather experts monitor conditions and let people know, usually over an NOAA radio, that there is a possibility that a hurricane may form.

Why do we name tropical storms? Who names them?

Storms used to be identified by the year and order in which they occurred. But, this led to confusion when two or more storms cropped up simultaneously. In the West Indies, hurricanes were named for saints if they happened to fall on a saint’s feast day. Possibly inspired by Clement Wragge, an Australian weatherman who often named violent storms after people he didn’t like, many weather organizations found it easier and less confusing to apply names, specifically women’s names, to hurricanes. Women’s names were used exclusively until 1978 when it was decided to include male names starting in the 1979 season.

Names for hurricanes are selected from a list drawn up by the World Meteorological Organization. Lists are created for each hurricane season and alternate between male and female names. This list undergoes a six-year rotation. If a storm is particularly deadly, its name may be retired from the list and never used again. Katrina is an example of one such instance.

What causes a hurricane?

Hurricanes are formed when warm air evaporates ocean water and draws it up. The vapor is normally taken away by winds where it cools and falls back to the ocean as rain. When no winds are present, the vapor falls back down and mixes with the rising warmer vapors. As it falls, it begins to spiral in on itself. This cycle of rising and falling vapor feeds the storm until it encounters dry air, finds a good wind or becomes a hurricane.

What is a hurricane made of?

Hurricanes are made up of air and water at their most basic elements. It’s the interaction of these things that creates the spiral that becomes a hurricane. As the water rises, its latent heat is drawn off as it cools. This heat causes more water to be drawn up and evaporate. This leaves behind a low-pressure area. Nearby, high pressure rushes in to fill the void, bringing with it more warm, moist air — and the cycle begins again. As long as warm, moist air can be found, the hurricane will feed itself, growing larger and more powerful until it finds dry air. With no moisture on which to feed, the hurricane will weaken.

What was the deadliest hurricane on record?

The deadliest hurricane ever recorded was the Great Hurricane of 1780, which resulted in a reported 22,000 to 27,501 deaths. Though no record remains of its track and strength, its appearance in the Lesser Antilles during the American Revolution caused heavy losses to natives and to the British and French fleets undergoing operations in the area. It occurred between October 10th and 20th, 1780.

Hurricane Mitch struck Central America with a loss of almost 20,000 souls due mostly to catastrophic flooding. Occurring in October of 1998, it also left about 2.7 million people homeless. This hurricane happened between October 22nd and November 9th.

The Galveston Hurricane of 1900 was the deadliest to hit the United States. Between 6,000 and 12,000 people were reported dead, with most official reports listing 8,000. Unfortunately, there were no records to prove the existence of many who died in that hurricane, save the memories of friends and family. While the number is officially listed at 8,000, historians and genealogists put the number closer to 12,000. Limited communication and a number of wrong guesses and assumptions at the U.S. Weather Bureau left Galveston woefully unprepared for the storm that lasted September 6th-8th.

What was the costliest hurricane?

Hurricanes for Kids
What’s the Difference between Hurricanes, Cyclones & Tornadoes?
Return to Top